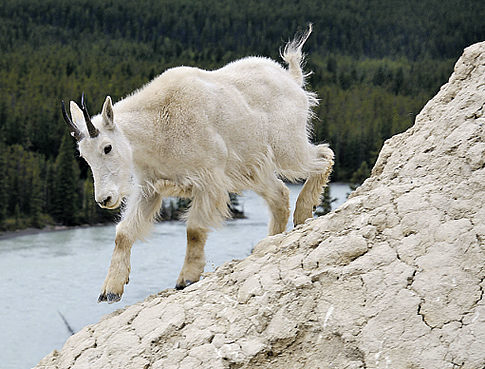 A mountain goat, like the one pictured above, gored hiker Robert Boardman to death.

In a rare and gruesome attack, an angry mountain goat mauled a hiker to death this weekend in Olympic National Park.

Robert Boardman, 63, had stopped for lunch during a day hike with his wife, Susan Chadd, and their friend, Pat Willits, when an aggressive mountain goat approached the group, ABC News reports.

According to Jessica Baccus, a hiker and longtime friend of Willits who arrived on the scene shortly after the attack, Boardman had instructed the two women to get away from the goat while he tried to wave it off.

But when Boardman himself tried to escape, the animal attacked, goring him in the thigh.

The angry goat then stood guard over Boardman as he lay bleeding on the ground.

Jessica's husband Bill Baccus, an off-duty park ranger, tried to scare the goat away by throwing rocks and waving a blanket, and was finally able to get the animal to move a short distance, though it remained nearby.

Jessica attempted cardiopulmonary resuscitation as the group waited for the Coast Guard, which arrived by helicopter and first tried administering electric shock to Boardman to revive him.

He had no pulse.

Boardman was taken to a local hospital by helicopter, but his injuries proved fatal.

"I am deeply saddened by this tragedy," Karen Gustin, Olympic National Park superintendent, told KOMO-TV. "My thoughts are with his family and friends."

Rangers have found and killed the animal, which will be studied by a veterinary pathologist.

This is the only known fatal attack by a mountain goat in the park's history, according to officials.

Approximately 3000 goats live in the park.

Barb Maynes, a spokeswoman for the park, said the goat was known by rangers for acting aggressive, and had been monitored by park staff for "the last several years."

Family and friends told KOMO-TV that Boardman was an experienced hiker, nurse and musician who loved the mountains.