This week, we received an email that we find rather disturbing. It brings forth the possibility that goats are now possessing the bodies of other animals and using them in their efforts to attack and traumatize humans. J.E. of Florida sent us the following message and pictures. Thankfully, he has found a way to handle the animal in question. If you have encountered similarly possessed creatures, please notify us so that we may attempt to study and track them.

To Whom It May Concern,

Much like our cat who we believe to be a dog trapped in a cat's body, we believe our dog, Cracker Too, to be a goat trapped in a dog's body.  All of the warning signs are there.  Often times, he will allow us to scratch his ears so he can attempt to eat our fingers off.  Whenever my fiancée or myself arrive home from work we spend 15 minutes dodging him as he performs various Tony Hawk moves off of the furniture in an attempt to kill us.  The realization of his goatness came when we witnessed with our own eyes, Cracker savagely devouring an Auburn University baseball hat, a tennis ball, wads of string from towels and the Incredible Hulk.  Nothing is sacred.

I've attached 3 pics of our Goat Dog.  [The first] is a picture of the goat dog tearing into the Hulk.  [The second picture] shows the moment directly after Crackergoat attacked my face.  Note wound on the chin.  And the anguish.  [The third] shows my fiancée fending off his vicious attack with a towel.  This move has saved our life many times.  Notice she is covered in his saliva.

A full-on attack from a goat is terrifying, but a goat trapped in another animal's body is mortifying.  You constantly ask yourself, what if I never found out?  I could be dead.  Who would provide for my family?

Thank you for your eye-opening information. 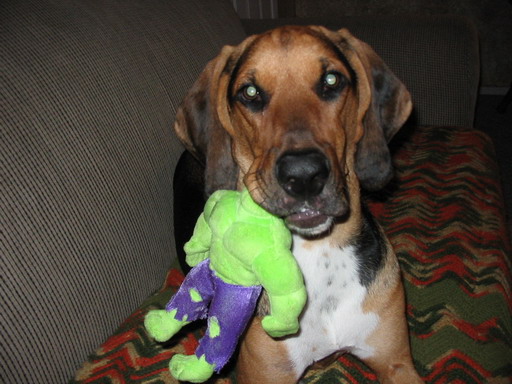 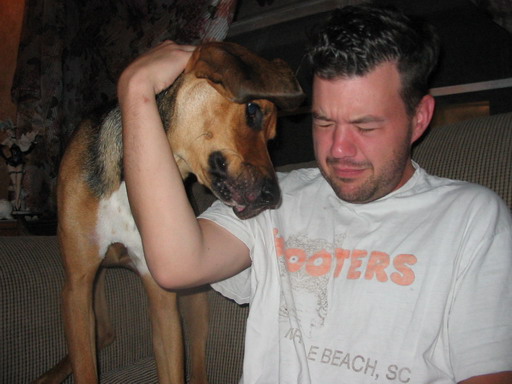 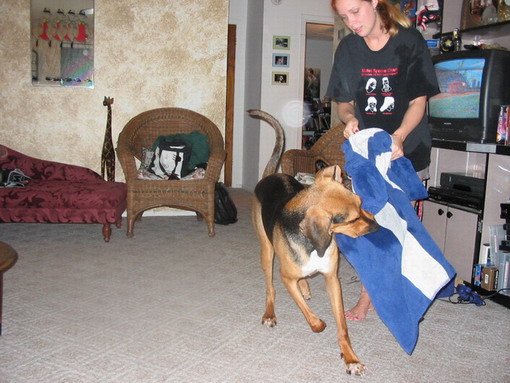