The Team was visiting one of the parks in the amusement area when they stumbled across a surprise waiting for them at the end of the train tracks. It was a petting zoo, but not just any petting zoo. Unlike any other petting zoo visited by the CGTF Investigative Team, it was not populated with the crazed goats previously reported upon. These goats were not interested in people!

Upon entering the goat containment facility at the petting zoo area, Team members were not mobbed by a swarm of deranged goats! These goats lingered under pavillions or under shade trees. Numerous children roamed the yard unapproached by goats! 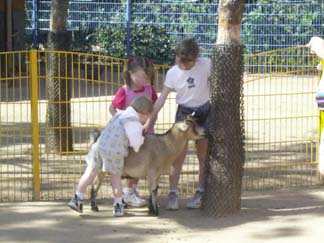 Never before has the CGTF heard of such an occurrence. It was too quiet, and caused our Team to become suspicious. They discovered that things are not what they seem at this "happy" place. Elsewhere in this place, the Team saw robotic goats, but the petting zoo goats proved not to be more such creations after careful examination. These goats appeared to be real, despite their behavior. Unable to determine what exactly was going on, the Team kidnapped one of these creatures. It has been taken to CGTF facilities for examination.

So far, we have discovered several things. First, these creatures do not appear to be under some form of mind control. No such device was found on the animal, nor did it behave in a more traditional petting-zoo-goat fashion when removed from the containment facility.

Second, the goat is a real animal, not an automaton or other such false goat. It has the same requirements for air, water, and nourishment possessed by "normal" goats. It appears to be able to make it's own decisions and not require programming of any kind.

Finally, the animal is not under the influence of any known drug. That does not rule out the possibility of a new, unknown substance, however.

This "goat" remains at the CGTF facility. It is still being observed in an attempt to determine what is causing it's strange behavior. We are waiting on more test results and will keep the world posted on our findings.