This weekend, while on an expedition to acquire apple cider, one of our operatives discovered a goat training facility about an hour's drive from CGTF headquarters in central Virginia. What at first seemed to be a farm market was uncovered as a training facility for terrorist goats. Our operative, hereafter referred to as "D," took the following pictures before reporting in to the CGTF.

The first indication that things were not what they seemed came when he walked out the back of the market to the picnic area. There he saw a pair of young goats and, ever on guard, decided to investigate. This is what he found on the goats' pen. 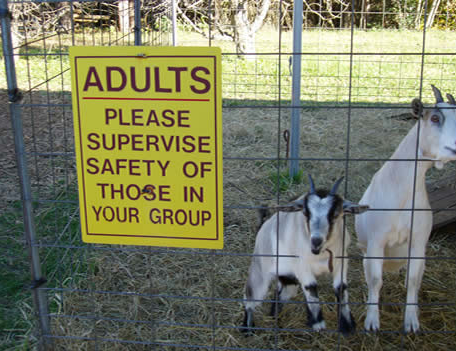 Obviously, those who run this market are aware of the danger these animals can create. The fact that the sign tells adults to supervise their groups is clearly a sign that these goats are being trained to go after children. This is what most frequently happens, as children pose less of a threat to the younger, smaller goats in their initial Trauma outings. His curiousity now engaged, D decided to take a closer look around and found more disturbing things.

What appeared to be a pen of relatively harmless sheep was of much greater concern than a casual glance showed. 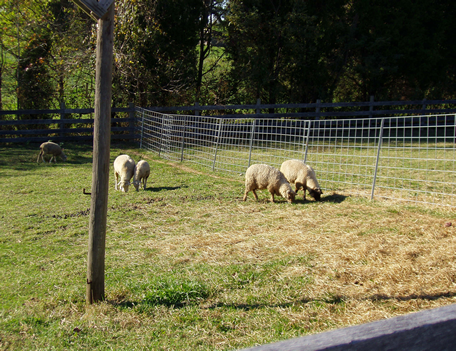 was merely a disguise for a goat obstacle course. A larger look at the pen revealed a goat lurking on a platform about fifteen feet up in the air. 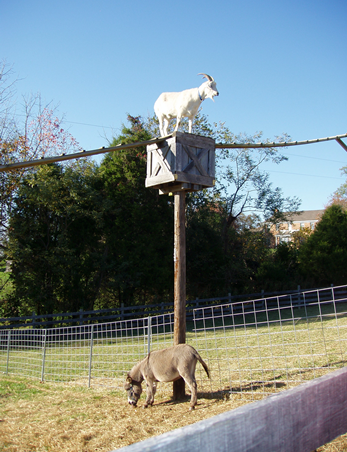 This goat was halfway through the training course, which appears to be designed to develop a goat's balance, creativity, climbing and stealth skills. It also gives them experience with victim targeting from raised areas as the course crosses the road above the pedestrian walkway. Presumably, this same course could also be used in arial assault training.

Perhaps the most disturbing sight was what happened to these poor people.

Our operative left after witnessing this to return later with more support.